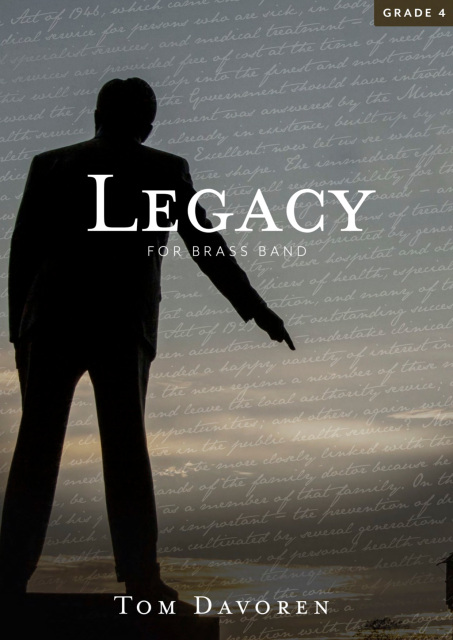 This study score is best printed in A4 or A3 size.

The idea for 'Legacy' was originally conceived in 2018 as a short work celebrating the life and achievements of Welsh politician Aneurin Bevan and the 70th Anniversary of the British National Health Service. The work was commissioned by Tredegar Town Band, supported by funding from Ty Cerdd, and premiered in the Speaker's Room of the Houses of Parliament featuring their soprano cornet soloist, Ian Roberts. This test piece version, created for the 2020 Regional Brass Band Championships of Great Britain, was born from my desire to tell a more complete version of Bevan's story.

In three continuous sections 'Legacy' is not only symbolic of Bevan's aspirational politics and character, but also of the experience of anyone whose life has been impacted by our NHS; something of which I can speak of personally. The primary goal of the piece is to present bands with music that offers them the opportunity to create a performance with feeling as its driver. Whilst a sound foundation in technique is obviously required to achieve this convincingly, creating a complete emotional picture should be the primary concern of bands and conductors.

The opening represents a need waiting to be filled. Whilst the pace, rhythmic content, colour and dynamic layout of the music seeks to create an atmosphere of foreboding, the choice of interval, style and phrase length of the melody is designed to offer a constant sense of underlying assurance. The central section is very much the core of the piece, representing the balance of hope and adversity as experienced by anyone who has been touched directly by our NHS. Again, it's a pacing of tension through dynamic, orchestration and in intensity of execution, that seeks to create this feeling. The final section is a march to progress, representing Bevan's relentless championing of social justice. Hopefully fittingly, the music here is generated entirely from material born in the earlier sections of the piece.

'No society can legitimately call itself civilised if a sick person is denied medical aid because of lack of means.' (Aneurin Bevan, 1952)