For more details including composers notes and sound clips please click on the title of a piece below.

Publishers - Tom Davoren Music, Studio Music Company, Ty Cerdd, Wright and Round Ltd.
Tom Davoren Music is only responsible for titles listed as published through Tom Davoren Music. The purchase and delivery and product quality of all other titles is the responsibility of their listed publisher or distributor.

Upon receipt of payment your order will be dispatched within 5 working days via email in PDF format.

Each PDF score and part is supplied stamped a copyright mark and legal statement. This contains details of the purchaser and a purchase date. Any material supplied is designed for use by the specific purchaser only. Any third parties wishing to perform a Tom Davoren Music work should contact Tom Davoren Music and purchase a set independently.

Tom Davoren Music hopes that you will be satisfied with your order. Should the received goods be damaged or faulty, please let us know in writing within 7 working days of delivery. Tom Davoren Music does not supply music on a sale or return basis nor does it accept returns of goods unless supplied in error or damaged/faulty. Tom Davoren Music will charge the full fee of a replacement PDF for any replacements outside this time frame.

This does not affect your statutory rights.

Printed music is VAT exempt in the UK at present (2010) and therefore no charges are added to your order. 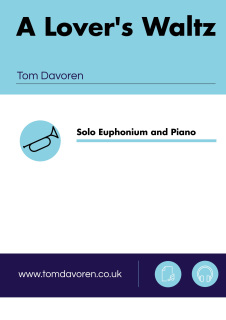 A Lover's Waltz was composed in 2018 as a wedding day gift for Naoaki and Tomomi Fukada, a piano and euphonium playing couple from Japan. 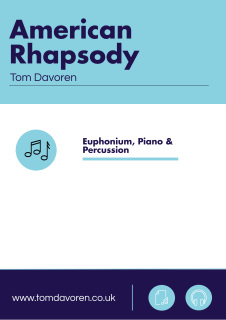 American Rhapsody was composed for Glenn Van Looy and Brassband Buizingen, conducted by Dr. Luc Vertommen. The premiere of this reduced version for euphonium, piano and percussionist was given at the Royal Northern College of Music Brass Band Festival in 2018.

The title American Rhapsody is perhaps a little deceiving, the music itself not being directly impacted by specific American musical material or indeed influenced by any facet of wider American culture. The piece is more autobiographical, representing small collection of the the composer’s personal experiences of the United States, realised here through a continuous musical narrative.

The opening movement, Colorado Eagle, refers to a visit to Lake Granby near Denver. The lake itself is manmade by the Granby Dam, stretching some 65 kilometres along the western entrance to the Rocky Mountain National Park. On a clear and bright day the rippling of the deep blue lake water seemed almost to blend into the skyline, with any defining line of horizon softened by full white clouds and snowcapped peaks. A single bald eagle, impressive in size, was seemingly effortless in flight only feet above the water.

Windy City Heartbreak was composed during a regular visit to the midwestern city of Chicago. Chicago is a special place, especially at Christmas time. The icy wind fuelled by lake Michigan is easily countered by the warmth in character of many Chicagoans. Sadly, statistics record that approximately six thousand people experience homelessness at any given point of the year in Chicago. Despite being surrounded by a population of 2.7 million, it must still be very easy to feel alone.

If you’re lucky enough to have performed with Brooklyn Wind Symphony then chances are you’ve spent a night At Matt Torrey’s. It’s the very image of a rustic American bar, set in the heart of Williamsburg, Brooklyn. The dark wood, dim lighting and ambient tunes provide a perfect release from the momentum of the work day’s traffic, trains and jam packed sidewalks. After dark Matt’s springs to life; an atmospheric hive of conversation, laughter and music. ​ 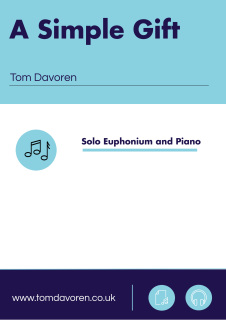 A Simple Gift  was composed over Christmas 2017 for well know euphonium virtuoso Steven Mead. As it’s title suggests the piece is a gesture of thanks from composer to soloist, celebrating Steven Mead’s gift for shaping melody as well the natural lyrical quality of the euphonium itself. 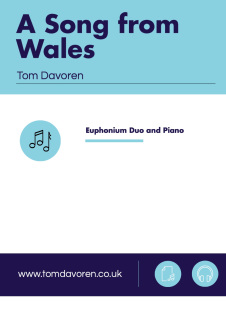 A Song from Wales - Euphonium Duo with Piano - 5mins - Grade 3

A Song from Wales was composed in 2017 for American euphonium friends Don Winston and Demondrae Thurman.

Don Winston is known well in the New York area as a euphonium player, patron of the arts and supporter of many musical activities. He regularly organises his own musical gathering in the New York / New Jersey Area, known as the 'Don Winston and Friends' recital series. A Song from Wales is a heartwarming slow melody based on material from the traditional Welsh Hymn, Rachie, composed by Caradog Roberts.

The second in Tom's 'Diversions' series of solo works, this piececelebrates the lyrical side of tenor horn as well the virtuosic technical ability of many of today's leading horn players, all through exploring Jon Roberts beautiful Welsh hymn tune Gwahoddiad.

As the progressive rock band Transatlantic quote in their epic work of the same name, We All Need Some Light.

Since the dawn of man fire has been out most essential companion. A steadfast provider, it is  source of comfort, assurance and safety. On the other hand though, fire is one of natures most brutal and unpredictable forces; erratic, entrancing, devastating and spectacular.
​
Our personal  ‘fire’ finds us in a multitude of ways. At one stage or another, we will all search for The Healing Power of Flame.

The Healing Power of Flame was commissioned by Kristy Rowe for premiere at the International Tuba Euphonium Conference 2012.

Mesmerized was commissioned in 2013 as a birthday gift for Ausralian tenor horn player Nicky Abkiewicz. The solo line is rhapsodic with the piano accompaniment minimalist in style. 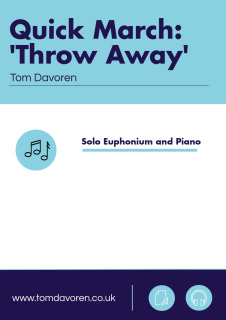 Quick March: ‘Throw Away’ was composed over Christmas 2017 for well know euphonium virtuoso Steven Mead. Intended as a tongue in cheek encore the piece is a bombastic, virtuosic take on an American style circus march.

'Soliloquy' is a study in contrast. Dream-like and optimistic outer music bookends a downtrodden and struggle depicting middle section, which is thematically derived from Mussorgsky's 'Bydlo'. The moral of the story here is that no matter how dark, there is always something from which one can draw light - a theme which permeates much of Tom's more considered output.

Three Moments for Solo Oboe was composed in 2013 for inclusion in the ABRSM Grade 6 examination syllabus. Each short piece responds to a particular moment experienced by the composer, with the music written immediately following the experience in a single sitting.

Trials for Olwen was commissioned in by Philippe Schartz, principal trumpet of the BBC National Orchestra of Wales, for a premiere performance at the International Trumpet Guild Conference in Columbus, Ohio, 2015.

The piece takes it's inspiration from the story of Culhwch and Olwen in 'The Mabinogion', a book of Welsh folk tales. In order to win the hand of the beautiful Olwen, Culhwch must gallantly complete a set of tasks set forth by her father, the giant Ysbaddaden Pencawr. Trails for Olwen attempts to catalogue the gamut of emotions felt by Culhwch when riding to face his first task.